I am Chand, the driver 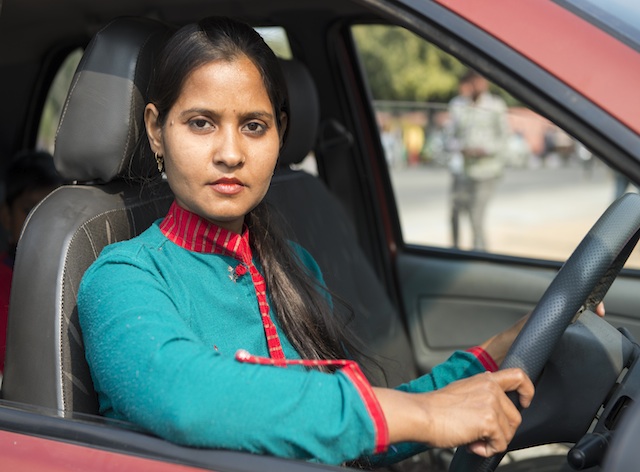 Chand is from a conservative Muslim family. She was married off to a truck driver at a young age and has four children. Content in leading a family life, she had never stepped out of her home. But when Chand’s husband died in a road accident, she was left to fend for herself and the children. She had to move out of her house and star living in a shack. She earned living by teaching Urdu to children, but she had to start working as a night watchman in a hostel to be able to support her family.

One day, she decided to enroll for the Women on Wheels programme after she met our mobilization team. But the going was tough. “I was mortally scared of driving and was afraid that I would hit someone. Others who had joined with me had gone much ahead. I lacked confidence. Dejected, I went back to my job as a night watchman. But the Azad team didn’t give up so easily. They convinced me that I could do it and took me back in their fold,” says Chand.

She used to come to the centre covered in a burqa from head to toe, change in the washroom and then go on with her training. We have provided her a loan to support her family in lieu of the incme she was loosing due to training. Chand has completed her training and obtained a licence, and today is working as a trainer in the very same Maruti training school, where she trained. Chand radiates confidence today. She is a far cry from the burqa-clad woman that she once was. In her own words: “I can’t believe that I have an identity of my own. From being known as someone’s wife, I am Chand, the driver.”

Our website uses cookies and related technologies to operate, personalise and improve your experience. By closing this message or continuing to use this site you agree to their use. Read our Cookie Policy to learn more or to change your settings.